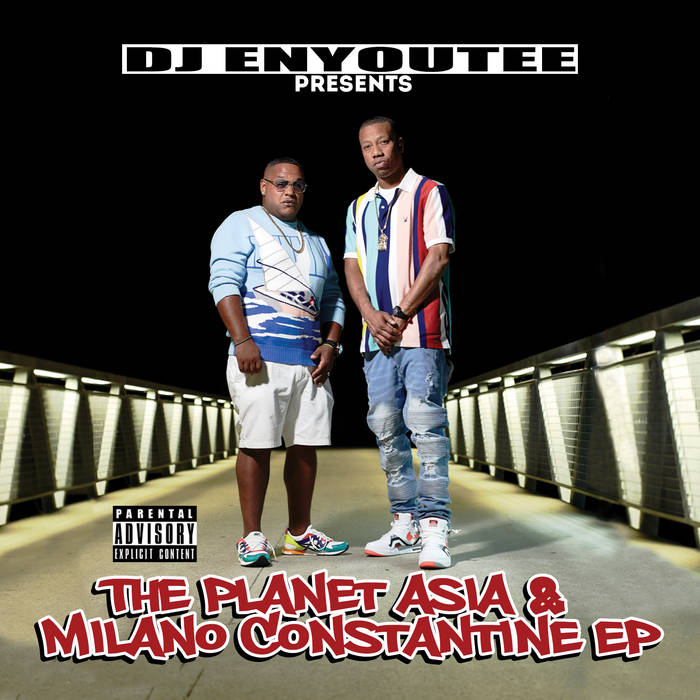 Living rap legends Planet Asia and Milano Constantine team up for six hard-hitting, lyrically-charged tracks for their collaborative EP helmed by New York’s DJ Enyoutee. And as the deejay tells it, getting these two together not only felt right but completely necessary. “Planet Asia and Milano respect each other as artists, so when I reached out, they were both down to make it happen without hesitation,” Enyoutee explains. “We all felt it was something that needed to be done.”

They were right, because this project embodies everything you’d want from the players involved with its creation. The two emcees remain at the top of their game with their rhymes, and they make their intentions clear straight from the jump. Like this line from Milano, a D.I.T.C. affiliate with roots in NYC, on the opening track, “Pharoahs”: “The joinin’ of the two pharoahs/ Tango & Cash, n***as hit you with double-barrels.” His West Coast partner-in-rhyme shares a similar sentiment later on the project during lead single “Milano Medallions” when he spits, “From Fresno to Manhattan/ We came to restore some order to this sh*t/ Because most of y’all need to be mad rappin’.”

Equally important, the production is absolutely perfect for Milano and Planet Asia to talk their most lavish sh*t. Enyoutee picked out a collection of neck-snapping boom-bap from six different producers, and he was able to keep the sound consistent and cohesive throughout. “Being a deejay, I know that combining the two artists would work from a sonic perspective, while also being something that their fans would want to hear, so I knew the beat selection had to be rugged but also diverse,” he says.

It all makes for another stellar entry in the already-impressive catalogues of both Milano and Planet Asia. These two have been at it for years and refuse to slow down, all while maintaining the same level of passion and desire. This ain’t some grown-up rap or anything like that; it’s hip-hop at its best, pure and simple.

Alpha Faktion is an unstoppable force from Middletown, NY consisting of producer/emcee Azwun, Kraze, a versatile and sharp lyricist and the one and only DJ Enyoutee who holds down the action on stage.
They have shared the stage with underground hiphop icons such as Pumpkinhead (PH) of Brooklyn Academy, L Swift (Swigga) of Natural Elements, El Da Sensei, Block McCloud, Cappadonna and many more. ... more

Bandcamp Daily  your guide to the world of Bandcamp